Half of America are domestic terrorists? 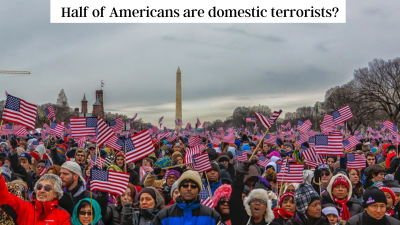 Those who oppose the iron fist of the state security apparatus will be lumped together in slick, corporate news reports with the criminal underclass.

These words were written by Pulitzer Prize winning author Chris Hedges in 2009 in reaction to what he saw over a dozen years ago as the rise of the surveillance state and its alignment with powerful corporate interests in propagation of the War on Terror.  He assumed such a fascist move would be approved and supported by the “radical Right,” which he saw as beholden to the military industrial complex, against those on the Left opposed to spending trillions of dollars on endless wars.

Hedges was ultimately wrong about who would be the target of the attack, but right about the nature of the surveillance state.  He warned that “as the pressure mounts, as this despair and impoverishment reach into larger and larger segments of the populace, the mechanisms of corporate and government control are being bolstered to prevent unrest and instability.”  Hedges, a child of the traditional Left (as opposed to modern Progressives, which seem to have fewer qualms about the surveillance state), foresaw that “the emergence of a corporate state always means the emergence of the security state,” whose motives are to “seize and maintain internal control” of the levers of power.   The forces of the security state have become alarmed by the populist revolt they see happening in America, and they are doing all in their power to shut it down.

Immediately after the Biden inauguration, many of the 74 to 80 million Americans who voted for Trump began to feel that their opponents were terribly sore winners who would not be satisfied with a political victory.  There was revenge and retribution in the air, being played out in multi-faceted ways. The most vocal of the Left were baying for blood, and their spine-tingling cries were heard across our country as patriotic and peaceful American citizens were declared “domestic terrorists.”

The Biden administration has made domestic terrorism a keystone priority. By domestic terrorism, they did not mean Islamic infiltration into America, illegal immigration across our southern border, or the homegrown liberal white perpetrators of the Antifa/BLM riots, but rather anyone whose ideas were contrary to the Left’s agenda and who dared to express them publicly. In other words, domestic terrorists are now anyone who voted for Trump, watched Fox News, decided not to get a vaccine, or stood up in a school board meeting to protest transgender students in their daughters’ locker rooms or the teaching of critical race Theory in her classrooms.

Today, tens of millions of every day Americans feel threatened – or at least deeply offended – by the “domestic terrorist” rhetoric.  It should be an obvious point, but it is not clear how a democratic republic can survive if it labels half of its citizens Enemies of the State. Yet that is exactly what has transpired in the toxic environment of 2021.  When the Department of Justice starts to investigate parents for showing up and speaking up at elementary school board meetings, we know we’ve reached the end of the road for reconciliation. The continued support of President Trump, refusal to get a vaccine, or standing up for both first and second amendment rights have all become cause for suspicion. These “radical” actions prove to the State’s actors that everyday Americans cannot be trusted. The corporate media serves to fulfill their role as mindless “courtiers” of the Biden administration in parroting the dangers of free-thinking people. It should be patently obvious that further alienating half of America by labeling them as terrorists, then ram-rodding through a raft of policy reversals by semi-legal executive power, alongside unjust and illegal vaccine mandates,          is no path towards national unity, and is only going to make our divisive political situation worse.